Although China has long been associated with the martial arts, sport in China today consists of a variety of competitive sports played in China, including mainland China, Hong Kong and Macau. Traditional Chinese culture regards physical fitness as an important aspect, and, since the 20th century, a large number of sports activities, both Western and traditionally Chinese, are popular in China. The country has its own national quadrennial multi-sport event similar to the Olympic Games, the National Games of the People’s Republic of China.

Badminton, football, basketball and ping pong are the main sports in China. Prior to the 1990s, sport in China, as in some other countries, was completely government-funded. Some top athletes had quit at the height of their careers because they were uncertain about life post retirement. The situation began to change in 1994 when Chinese football became the first sport to take the professionalization road and in its wake similar reforms were carried out in basketball, volleyball, ping pong and weiqi. The process brought with it commercialization; sport associations became profit-making entities and a club system came into being; professional leagues formed, improving China’s sports environment; and commercial management systems took shape. The professionalization of sports has encouraged the emergence of a sports management market and business-structured systems. Sports club operations now cover ticket sales, advertising, club transfers, commercial matches, television broadcasting and other commercial activities. Another aspect of the reform is that some Chinese athletes have joined foreign professional leagues. For instance, basketball star Yao Ming entered the NBA in the 2002 draft.[

Chess China is now a chess superpower and proved so at the 2006 37th Chess Olympiad in Turin when the men’s team came second and the women’s team third for easily the best result overall. The Chinese progress has been underpinned by large government support and testing competition in numerous tough events. Commensurate with its status, China currently has seven top hundred players, second only to Russia. However, even today countries like Russia and Israel still have an edge in experience over their Chinese counterparts.

Ping Pong Ping Pang Qiu is the official name for the sport of table tennis in China. Apart from the national representative team, the table tennis community in China continues to produce many world-class players, and this depth of skill allows the country to continue dominating recent world titles after a short break during the 1990s. The overwhelming dominance of China in the sport has triggered a series of rules changes in the International Table Tennis Federation and as part of the Olympics.

Allure of this sport lies in relative simplicity, inexpensive equipment and easy accessibility to venues. Badminton is a very established sport in China and famous Chinese badminton players include Lin Dan, Zhang Ning, Gao Ling, and Huang Sui. It’s a popular recreational sport and amateur leagues exist across the country. 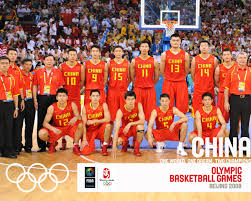 Basketball Basketball After the USA and Canada, China is oldest country that started playing basketball. Basketball arrived in this country in the 1890s and was declared a national pastime in 1935. However, basketball became popular only in the 1990s when globalization and the Internet allowed the Chinese population to come in greater contact with the sport being played elsewhere in the world. The first professional team was established in Shenyang which was sponsored by the Anshan Steel Company. The Chinese Basketball Association was formed in 1995. The popularity of the sport touched new heights after Yao Ming joined the NBA as a player of the Houston Rockets in 2002. It is estimated that almost 300 million Chinese play this game. The massive viewership for the screening of the basketball games during the 2008 Beijing Olympic Games has led many believe that basketball may soon replace table tennis as the most played game in China.

Badminton This sport is played on a hard court divided by a net. It can be played in singles and doubles too, with each player using a racquet (or racket) to hit the shuttlecock. Since the inception of the World Badminton Championships in 1977, China has dominated the event wining 40 golds, with Indonesia in second position with 18 golds. In fact, the dominance of this Asian Giant in badminton is so much that it has sparked fears that the sport may soon become ‘boring’. Like table tennis, this sport also originated in England. However, it is an established sport in China and is taken up by Chinese children quite early in life. No wonder the country has produced a string of world-class players like Zhang Ning, Lin Dan, Gao Ling, and Huang Sui.

Back in March 1959, at the 25th World Table Tennis Championships held in Germany, the table-tennis player Rong Guotuan won the first world title in China’s sporting history. It was followed by many more successes. By the end of 2004 Chinese athletes had altogether won 1,800 world championships and broken 1,119 world records. In the 16 years since 1989, Chinese athletes have won 1,446 world championships, accounting for 80.3 percent of the total; and broken 737 world records, making up 65.9 percent of the total. It was a period when China’s competitive sports developed continuously and rapidly. At the 2008 Olympics, China made its best ever Olympic showing, with a tally of 100 medals, including 51 golds, 21 silvers and 28 bronzes, coming first in the medals table, achieving a major breakthrough in China’s sporting history.

The results in competitive sports were down to a training system which is constantly being perfected. It is based on youth amateur sports schools and basic-level clubs, with teams representing localities as the backbone, and the national team at the highest level. The training system ensures that China elite teams maintain a year-round squad of some 20,000 athletes.

Welcome to WordPress.com. After you read this, you should delete and write your own post, with a new title above. Or hit Add New on the left (of the admin dashboard) to start a fresh post.